The first Keirin Final saw Lester battle it out with Kollyn St. George (Breakaway) as the two National cyclists were neck and neck down to the finish line in the Elite Women Keirin Final. The photo finish capture was necessary to decide between the two, with Lester doing just enough on the line to take the National Championship. Teniel Campbell (Team DPS) had to settle for bronze while Aziza Browne (AWCC) was in fourth. In that same event Jhordan St. George was able to defeat Dominique Lovell (AWCC) for first.

The much anticipated Junior Men Keirin did not disappoint as the crowd was on their feet in the final 150m when they saw a three way battle between Nicholas Paul, Chaquille Henry (AWCC) and Je’Land Sydney (Kallisto FCV) three abreast rounding the last turn. Paul was just too strong as he rode away from the other two with Henry edging Sydney on the line for 2nd.

The Men’s Keirin final too was mouthwatering, especially when Kwesi Browne leaped out of the bunch in a burst of speed with 250m remaining, leaving only Keron Bramble (Sonics) close enough to hold on and leaving the rest of the pack scampering to catch. Coming down the final straight, Bramble look to have rounded his Arima counterpart, but Browne found another gear to ride away with the National crown.

The Omnium for Junior and Elite Men completed its first three events and neither can be decided with just 2 points separating first from second in the Junior Men between Tyler Cole (Team DPS) and Jabari Whiteman (Southclaine). In the Elite Men, Justin Roberts (Team DPS) also holds a slender 2 point lead as well over Sheldon Ramjit (Hummingbirds) going into the second day of Omnium competition.

Day 3 begins from 6:00pm on Saturday with the Omnium coming to conclusion with the Flying 250m, 1km Time Trial and Points Race while the Sprinters return for the Flying 200m and Quarter-Final rounds. 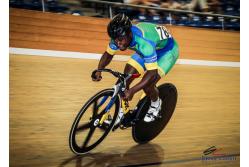