Teniel Campbell created history on Friday after she shattered the Women 3km Individual Pursuit National Record when she was clocked at 3:56.863 to finish 7th and bettered Christiane Farah’s mark of 4:01.164 set at last year’s Elite Pan Ams in Aguascalientes, Mexico.

Not only does Campbell become the first female T&T cyclist to break the 4 minute barrier in the 3km Individual Pursuit but this was the first time that she has competed at the Elite level. At the Junior level, her greatest distance was 2km Individual Pursuit, adding even more flavor to the achievement.

Also in action on Day 3 were Jodi Gooridge and Aziza Browne in the Women Flying 200m. Both ladies managed personal bests in the event after they were clocked at 12.200 and 12.340 to finish 13th and 14th overall respectively. Only the top 12 cyclists however advanced to the 1/8 Finals of the Sprint.Jovian Gomez and Gavyn Nero finished tied for 12th in the grueling Men Points Race.

Justin Roberts clocked a personal best at sea level in the 1km Time Trial with a time of 1:02.786 in an event eventually won by Santiago Ramirez (COL) in a time of 1:01.113

Varun Maharajh also started his Omnium quest and is currently tied for 6th place after 3 events with 94points. Maharajh started with modest 8th & 7th place results in the Scratch Race and 4km Individual Pursuit which saw him on 54points, some 10 points behind a podium finish. Maharajh however returned to the afternoon session in fine style by winning the Omnium III - Elimination to gain 40 valuable points. The win now sees Maharajh on 94 points with just a mere 6 points separating 2nd from 8th.

Omnium Results after 3 of 6 Events:

Featured tomorrow will be the blue ribbon event, the Men Sprint! T&T will be represented by Njisane Phillip, Quincy Alexander and Kwesi Browne in this event as they all chase for vital UCI Eligibility and Olympic Ranking points. Teniel Campbell will also return to the track as she lines up in the Women Omnium event. 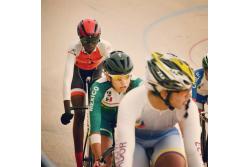