Consistent performances by both Akil Campbell (PSL) and Kollyn St. George (Breakaway CC) in the USA and Europe respectively within the last month has seen them being rewarded with debuts in the Top 100 of the UCI World Rankings published 20th July.

Campbell, the highest ranked T&T Elite Endurance cyclist, jumped into the top 100 of the Men’s Omnium to now sit in 83rd after previously sitting on the edge of the top 100 at 110th just about a month ago. Campbell has shown consistency while competing at the Valley Preferred Cycling Centre in Trexlertown, USA during their summer and looks primed and ready to take on the Elite Nationals in about 3 weeks.

Also making her debut in not only one but two rankings for the 2018 season was Kollyn St. George. The Breakaway cyclist campaigned throughout the European circuit during her three month stint at the World Cycling Centre in Aigle, Switzerland. That campaign saw her move 10spots up in the Women’s Sprint into 95th and a new entry into the Women’s 500m Time Trial in 67th after a second place showing at the Lauf Cottbuser SprintCup 2017 in Germany.

Njisane Phillip also moved 5 spots in the Men’s Sprint to 44th while Kwesi Browne went from 9th to 12th in the Men’s Keirin but remains T&T's highest ranked cyclist.

See below for a summary of T&T’s cyclists within the World Top 100: 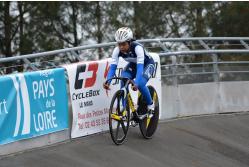