Jordan Castle (NZL) and Sol Angie Roa (COL) tactically captured the Men and Women Keirin events respectively on the second day of the National Cycling Centre Opening Event in Couva.
Roa timed her jump precisely after Keiana Lester (Bike Smith) eased away from the group as the derny exited the track with 2.5 laps to go. As they neared 1 lap remaining, Roa made her move with Teniel Campbell (Team DPS) in hot pursuit. Roa was just too strong in the end, rounding Lester in the final straight as the Bike Smith cyclist settled for 2nd while Campbell had to be content with fourth.

Jordan Castle also rode a smart race kicking in the last 125m to come over Anderson Parra (COL) and take the top prize while his countryman, Sam Dakin (NZL) eased in on the inside of the Colombian to snatch second place.

Roa was not done either as she took a clean sweep of the Women’s Sprint events after she set the first ever Velodrome record in the 500m TT in a time of 36.396 seconds. Kollyn St. George (Breakaway) was in second with a time of 36.844 while Keiana Lester was in third in 37.826 seconds.

Antonio Torres (CHI) made it two wins in two curtain events after he and Javier Gomez (COL) lapped the field twice. However, earlier in the race, Torres, Gomez and young T&T rider, Tyler Cole stole a march on the field as they went a lap up within the first 20 laps. Torres and Gomez however, broke free once again as they went on to gain yet another lap.

In last kilometre, Torres was just too strong as he sprinted away from Gomez while Cole was happy with his third place finish.
The next major event at the National Cycling Centre will be at the end of August when the TTCF hosts the 2016 Junior Pan American Track Cycling Championships from 27-31 August, 2016 when Team T&T comes up against over 200 cyclists from 20+ countries! You do not want to miss that! 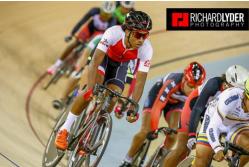