Stay away from the Ham and Grog and do not over do the pastelle and black cake as the TTCF presents the "Christmas Race Fit" challenge event on December 10th at the National Cycling Centre from 3:00pm!

The Christmas themed event will have exciting track cycling from some of T&T's top cyclists as they prepare for the hectic 2017 Racing Season! Featured races include the Santa Sprint, Parang Tempo, Feliz Eliminacion and Pastelle & Points Race! Who will come out on top and with over $7,000 worth in prizes up for grabs.

Admission and Registration is FREE, FREE, FREE and open to cyclists registered for the 2017 season, born in 2001 or before and have ridden on a banked 250m velodrome previously. 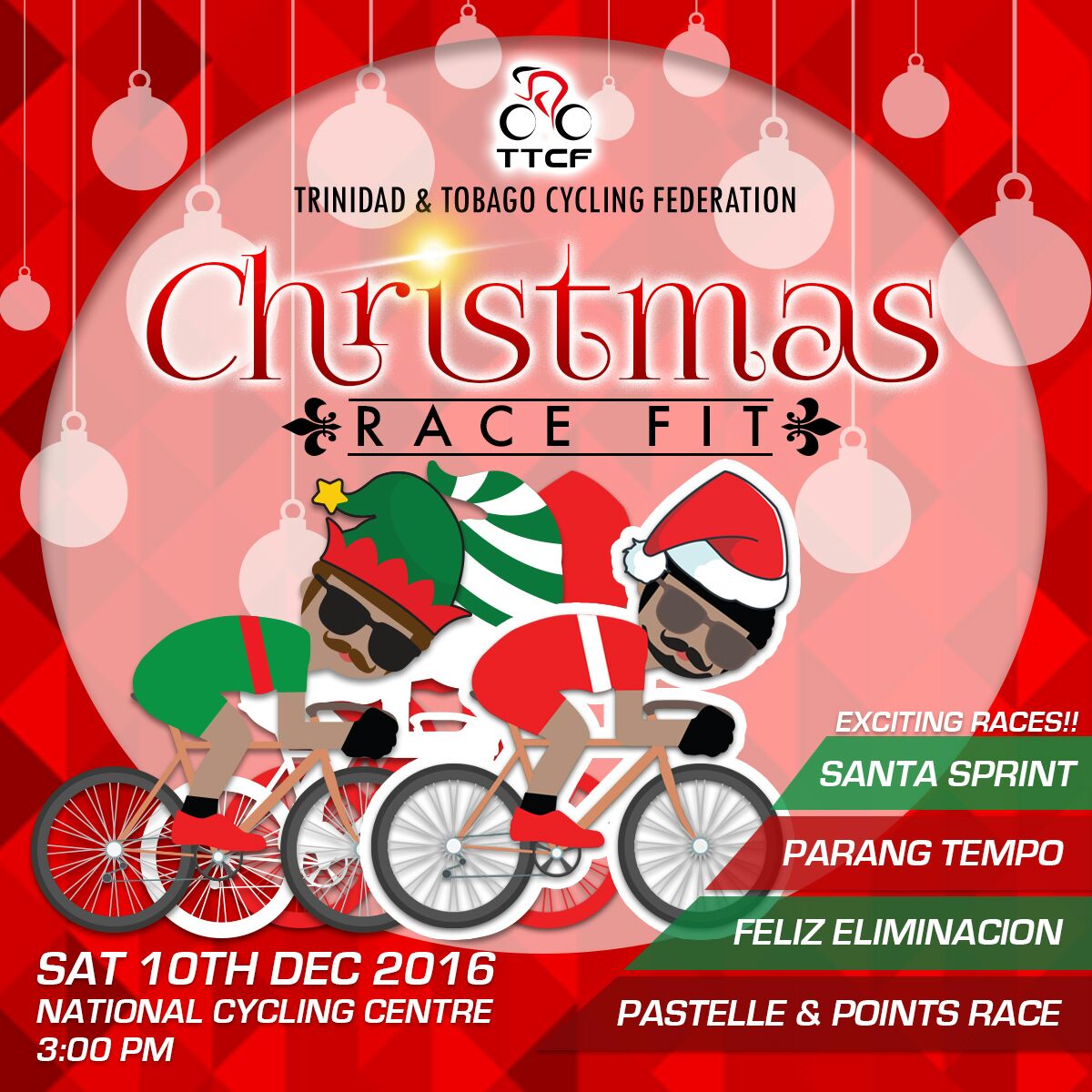 PARANG TEMPO RULES
1. Maximum of 20 cyclists will be allowed on the track for all mass start events. If more than 20 cyclists are registered, there will be 3.75km (15lap) heats prior to the Flying 200m for the Santa Sprint with 10 laps of points
2. First 5 laps in the Parang Tempo is free. A bell will be sounded with 21 laps to go. Cyclists will then sprint for points every lap. The winner of each lap gets 1 point. The cyclists with the most number of points will be declared the winner."
"FELIZ ELIMINACION
1. This is your typical Elimination with a twist! All cyclists will be restricted to a maximum gear of 93 or 7.31m (48x14)
2. The first lap is free and the eliminations with a bell signifying that there will be an elimination the next lap around
3. Eliminations will be held every other lap
4. If there are more than 20 cyclists registered, heats of Eliminations will be held between the Sprint quarter-finals and Semi-Finals

PASTELLE & POINTS RACE
1. The top 20 cyclists after the Parang Tempo and Feliz Eliminacion will advance to the Pastelle & Points Race
2. If there are ties, the cyclist with the higher placing in the Feliz Eliminacion will advance
3.The Pastelle & Points Race follows the format of Points Race with sprints every 10 laps. The top four cyclists will get 5,3,2,1 points in each sprint. In the final sprint, double points will be available. Gaining a lap will add 20 points to your tally, while losing a lap will remove 20pts
4. The winner of every sprint will also win half a dozen pastelles, therefore with 2 dozen pastelles on the line!

OVERALL ENDURANCE POINTS
1. The three endurance events; Parang Tempo, Feliz Eliminacion and Pastelle & Points Race will count towards the overall winner of the Endurance events. The winner of Parang Tempo and Feliz Eliminacion will receive 40pts each, second 38pts, third 36pts and so on until 20th.
2. Every point won in the Pastelle & Points Race however will add to the overall tally with the cyclist with the most number of points at the end of the three events declared the winner"

PRIZES
1. The overall winner of each Santa Sprint (Open 1 and Open 2), as well as the overall Endurance Winner (through the 3 event Omnium) will receive FREE registration for ALL TTCF hosted events for 2017. These will include TTCF Road Series, Crit Series, Track Series, MTB Series, National Track Championships, National Road Championships, National MTB Championships and Easter International Grand Prix. The value of each is approximately TT$2,000.00
2. The winner of each Endurance event will also win special prizes courtesy Caribbean Bottlers Limited and Carib Brewery which will indeed come in handy for the Christmas Season! " 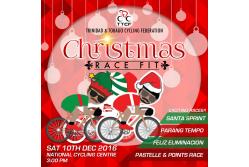