Presentation College, Chaguanas is famous for producing numerous T&T and West Indies cricketers, but a young man by the name of Tyler Cole is putting the school on the map in another sport.

Former Presentation students Ravi Rampaul and Adrian Barath have both worn T&T and West Indies colours, while former West Indies Under-19 player Bryan Charles and Varindra Jagrup, who captained the national U-19 cricket team earlier this year, also walked the halls of ‘Pres.’

But Cole, who is still weeks shy of his 16th birthday, is making a name for himself in the sport of cycling. Most recently, Cole won the division two overall title at the Tobago International Cycling Classic which took place from September 29–October 4. Prior to his success in Tobago, Cole won two gold medals for T&T at the Junior Caribbean Road Cycling Championships in Dominican Republic back in August. Cole, who trains with the Rigtech Sonics Cycling Club, won gold in the juvenile men’s road race and the juvenile men’s time trial. Cole said his achievements at the Caribbean Championships meant more to him.

“I’m more proud of winning Caribbean Championships, because it was an event I went to last year and I really wanted to better my performance. So from since then I trained really hard for a long time in preparation for it, so to go and win both events was a really big accomplishment for me.” At the 2014 Junior Caribbean Road Cycling Championships, Cole won gold in the juvenile road race and bronze in the individual time trial.

Cole likes to battle against the clock in the road individual time trial. “I think my favourite event would have to be the road individual time trial, mainly because it is a very grueling event. But I really like the challenge, and it also gives the cyclist the chance to really put out everything to show who really is the best as there is nothing more than just the cyclist, the bike and the clock that you’re trying to beat.”

The teenager has set himself goals for 2016, which includes competing at the Junior Pan American Championships again. Cole became the first T&T cyclist (junior or elite) to earn an endurance medal at a Pan American Track Championships. In April, he won bronze in the omnium event at the Junior Pan Am Games in Aguascalientes, Mexico, a city known for producing quick times because of the altitude.

Cole, who has been riding competitively since age ten, knows he has to work harder to reach the level of current road race world champion Peter Sagan, who is one of his role models. Cole stated that Sagan, who is from Slovakia, is one of the best all round riders in the world and he races with great passion.

“I think that as I get older and have time to develop myself more physically, I can be stronger over time and also mentally so that I can have enough experience to be able to challenge some of the world’s best without the intimidation of being at that level, then I will be ready to compete at that stage.” 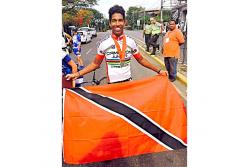