The 4th Annual Luces Brothers International Memorial Track Meet was brought to a close with an exciting sprint finish between Jamol Eastmond (Heatwave), Akil Campbell (Team DPS) and Jabari Whiteman (Southclaine) which saw the Bajan coming home victorious. The 25 lap curtain event was fast paced as several cyclists attempted to break free from the bunch, with all being unsuccessful.

Akil Campbell was busy at the front as he too tried in vain to form a successful breakaway which set up a mouthwatering bunch finish. With 1 lap to go, Jamol Eastmond came over the top of the bunch like a rocket, leaving only Campbell and Whiteman in striking range. Eastmond was able to hold off the late charge by the duo and thereby took top honours. The curtain event win also complimented his victory in the Elimination event earlier in the day.

Keron Bramble (Sonics) also got the Skinner Park posse to their feet after he captured the Men’s Keirin Final ahead of Nicholas Paul (Breakaway) and Justin Roberts (Team DPS). Niki Kovacs (GBR) rode a stellar race from infront to hold off teammate Madelyn Moore and Teniel Campbell in the Ladies version of the Keirin.

Olympic bound Njisane Phillip played the role of lead out man for much of the event for his teammate Bramble until he captured the 500m Final ahead of Varun Maharajh and Andy Leverton (GBR). The weekend of cycling comes to an end on Sunday when the Southern Games once again rolls into Guaracara Park for exciting grass track cycling! 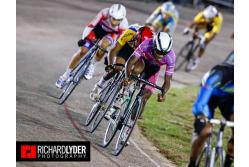