The powerful Endurance combination of Varun Maharajh and Akil Campbell will once again adorn the red, white & black when they represent Trinidad & Tobago at the Easter International Cycling Grand Prix at the Arima Velodrome on 25-26 March, 2016. The duo who both dominated proceedings at the recently concluded Southern Games will also receive support from the consistent Sheldon Ramjit. The Endurance cyclists will take on former Omnium Pan American Champion - Jose Aguirre (MEX), Multiple Austrian National Champion - Stefan Matzner (AUT) and Multiple Bajan National Champion - Phillip Clarke (BAR) to name a few.

In the Sprint department, the Arima native, Quincy Alexander will lead the way as he looks to defend his 2016 titles in both the Sprint and Keirin. Keron Bramble will join Alexander as Sprint members of the team as the young Sonics rider has shown good form lately. Colombian National Champion - Diego Pena (COL), Former Junior Worlds medalist - Edgar Verdugo (MEX) and David Espinoza (USA) will all be trying to knock Alexander off of the top tier of the podium.

Dana Feiss (USA) will have stiff competition when she too tries to defend her Sprint and Keirin titles when she faces teammate Mandy Marquardt (USA), Krista Ruby (CAN) and T&T's very own Kollyn St. George and Keiana Lester.

The Easter Grand Prix will kick off with the Flying 200m from 5:00pm and it is promised to be actioned packed and full of excitement for the entire family. 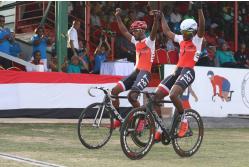