The third and final day of the 2015 National Youth Cycling Championships came to an exciting end today at Skinner Park  as cyclists rode for National Glory in the Keirin, Team Sprint, Team Pursuit and Points Race events.

The Juvenile Boys Team Sprint event brought the first set of excitement with a nail biting finish between a Sonics trio of Zion Pullido, Aaron Alleyne and Tyler Cole came up against a mixed team comprising Juvenile Sprint Champion - Dean Woodsley (Petrotrin), Tinymite Sprint Champion – Justin Baptiste and Juvenile Pursuit Champion – Jabari Whiteman. The competition was neck and neck from the start but Sonics prevailed in the end by just about 0.5 seconds.

However, no one could deny that the race of the weekend was the Juvenile Boys Keirin Final. With everything at stake, our young cyclists left nothing to chance. As the finalists got bell, it was Tyler Cole (Sonics) who started the sprint with about 300m remaining. Jabari Whiteman (Southclaine) latched on the Cole as he timed his move around him with just over 150m to go. As the bunch rounded the final turn, Dean Woodsley (Petrotrin) and Chaquille Henry (AWCC) also came up broad side as the quartet sprinted for home. It was not much more than half of a wheel which separated 1st from 4th, but it was Cole who came out victorious in the end ahead of Woodsley, Henry and Whiteman in that order.

It truly was an entertaining 3-days and the TTCF will like to extend a hearty congrats to all the new National Champions and as well to all the volunteers and officials who performed yeoman’s service to ensure the smooth execution of the event.

See you next year! 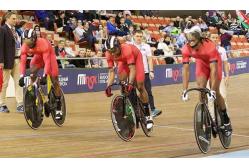