Farrier requests use of new Velodrome

President of the Trinidad and Tobago Cycling Federation (TTCF), Robert Farrier, has put forward a request to officials in the Ministry of Sport for pardoned use of the spanking new 250-metre track at the still unfinished National Cycling Velodrome in Balmain, Couva, as national cyclists intensify their preparations ahead of the first of three crucial UCI World Cup legs, which pedals off in Cali, Colombia, from October 30 to November 1.

Speaking to the local cycling boss, who is currently in Barbados ahead of this weekend’s Caribbean Elite Road Cycling Championships, Farrier revealed that use of the facility by TT ’s yet to be named World Cup representatives is essential towards ensuring that these athletes do receive the best forms of preparation ahead of the highly competitive international meet.

“We’re hoping to have the national team get in some training sessions before the World Cup at the new facility,” said the TTCF head yesterday. “We (TT CF) have been in discussions with the Ministry of Sport to see if we could at least have some closed door sessions with the national team. If we can at least get some use of the track area, which is more or less complete, this would do us well pertaining to proper preparations for this month’s World Cup.” The TT CF is expected to release this nation’s official World Cup team early next week. However, National sprint and keirin champion Njisane Phillip’s recent competitive exploits on the world stage have already confirmed TT a place in the Men’s Sprint event.

Also favoured to fly the red, white and black in the Keirin is “pocket rocket” Kwesi Browne while TT is also expected to field an able-bodied trio for the Team Sprint event.

UCI points attained from participation at these three legs will go towards qualification for next year’s World Cycling Championships (March 2-6, London) and Olympic Games in Rio de Janeiro, Brazil.

Last week, UCI International Commissaire Randall Shafer conducted a three-day Commissaire course in the cycling disciplines of Track and Road. On the final day, Shafer and his class of approximately 15, were taken to the new Velodrome by Farrier and other TT CF officials. This was Shafer’s first visit to the facility and he was certainly impressed.

Farrier concluded, “basically the TTCF is putting things in place to build the capacity so when the facility is opened, we will have all the competencies to run the facility.

The Commissionaire course was just one of the aspects we looked at. It’s about building capacity. Those who took part in this course also did an exam and we are presently waiting on results. I’m hoping that all who took part passed and can come on board.” When asked what were Shafer’s thoughts on the cycling’s new home in TT , Farrier revealed, “Let me quote Mr Shafer exactly as he said it. He said, ‘I’ve been to a lot of churches in the world, and this Velodrome is the cathedral’.” 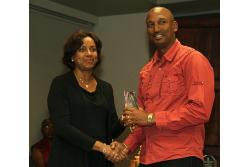