After shattering the Junior Pan American record and National Records in April this year in Mexico, the golden pair received automatic selection for the National team to represent T&T at the annual World Championships. St. George and Lester will be aiming at earning T&T’s first ever Junior Worlds medal in the Team Sprint on Wednesday.

Lester & St. George are also expected to compete in the 500m Time Trial (Thursday), Sprints (Friday-Saturday) and Keirin (Sunday). Also a part of the team is Junior Pan Am Keirin bronze medalist, Sei Daniel as he too makes his debut at a global stage.

Daniel is expected to line up in the Keirin (Thursday) and Sprints (Saturday-Sunday). Accompanying the team are Fitzroy Daniel (Manager) and Anthony Sellier (Coach). 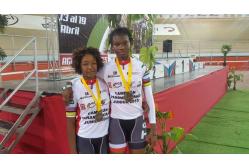