Junior cyclist, Jabari Whiteman (Heatwave) seemed to adopt the namesake of the Barracuda Track League this weekend when he showed no mercy for his competitors. Recently returning from a one month training stint in Wales under the guidance of three-time World Champion and Olympic Gold Medalist, Dani King and Team Sky cyclist, Luke Rowe, the Presentation College, San Fernando pupil showed his tenacity from day 1.

On Saturday, Whiteman topped the 2400m Individual Pursuit when he stopped the clock 2:54.62 at an average speed of 49kph. The speed was on-par to set a new track record for Junior Men in the 3km Individual Pursuit with only Marloe Rodman (PSL) coming close at 3:00.30. On Day 2, Whiteman would top both Junior Men events after leading the Elimination from the front. However, it was his performance in the curtain event on Sunday night, the 30 Laps race for Elite 1, 2 and Invitational that had the crowd in awe.

The Heatwave cyclist came into the event having to fend off several attacks from a strong PSL team as Marloe Rodman, Akil Campbell, Romello Crawford and Emmanuel Watson unleased a cadre of vicious attacks and counter-attacks. However, the youngster neutralized every one of them and brought it down to the final sprint. With 200m to go, he came up alongside the seasoned Rodman and found a second gear as he came out tops in front of an appreciative crowd.

It is difficult to not sound monotonous with every event report when recapping the Elite Women, however, it was Teniel Campbell (PSL) once again dominating her category. In the final event on the weekend for Elite Women, Campbell allowed Shania Baptiste (Open Road Challenge Accepted) to open a half-lap gap. With the sound of the bell, the southerner leaped out of the pack as she quickly closed the lead and take top honours.

Justin Baptiste looked to be finding some good form just in time for Easter Grand Prix as the Breakaway cyclist won all four races in the Juvenile Men category. Sylese Christian (Phoenix CC) returned from her base in Florida to show some good turn of speed in the Tinymite Women; winning her category overall.

Keron Bramble (Sonics) also easily dispatched Jude Codrington (Sonics) in the semi-final and Akil Campbell (PSL) in the Final to take the Sprint title. Codrington would have to settle for fourth as Thireef Smart (Breakaway) would win the bronze in two straight rides.

All roads lead to the Arima Velodrome on the 14th and 15th April and to the National Cycling Centre on 17th April when the UCI Class 1 and Class 2 Easter International Cycling Grand Prix takes over! Where will you be when Speed Meets Paradise? 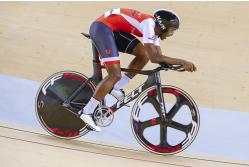