Was there a better way to end an action packed and exciting Junior Pan Am event than to see the host country’s flag hoisted and anthem played for the final awards ceremony? Nicholas Paul’s gold in the Men’s Sprint culminated a five-day tournament that pitted the best Junior cyclists in the Western Hemisphere against each other, with each day offering two sessions of world class cycling.

Day 1
Colombia stamped their authority early as they capture the Men’s Team Sprint, Team Pursuit and Women’s Scratch Race. Team TTO pulled off Silver in the Men Team Sprint after shattering the National Record in a time of 46.526 in the qualifying round. In the finals against Colombia, the trio of Chaquille Henry, Nicholas Paul and Jabari Whiteman was just shy of the Gold, taking home second infront of an appreciative crowd.

Jhordan St. George and Dominique Lovell flew the flag high with a 7th place overall finish in the Women’s version of the Team Sprint. 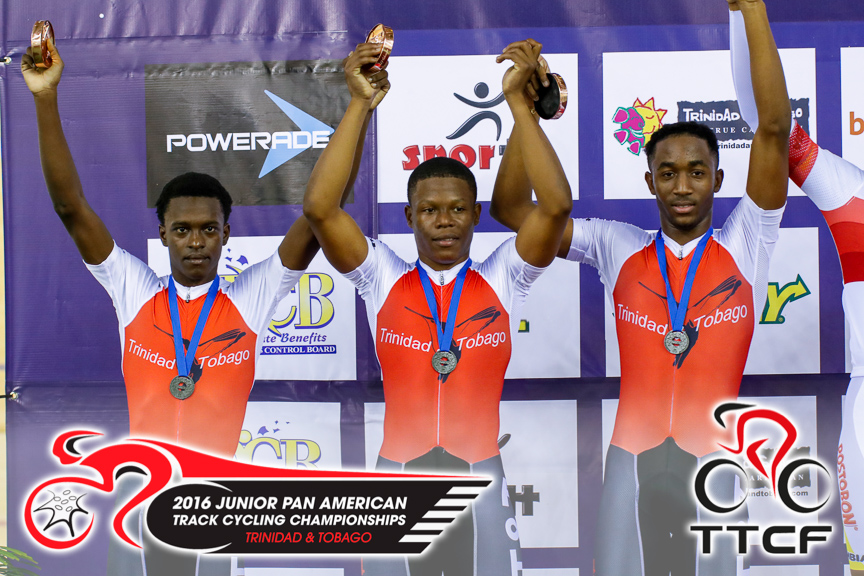 Day 2
Nicholas Paul and Chaquille Henry marched their way in the Men Keirin Final, accompanied by two Colombians, one Mexican and one Guatemalan. After a disqualification of Pineda (GUA) and a restart of the final, Nicholas Paul came over the top while Henry found room on the inside. Paul would eventually split Urrego (COL) and Quinterro (COL) to finish second while Henry was just outside of the medals in a photo finish.

Tyler Cole finished 6th in the Men’s Scratch Race in a sprint for home and 9th in the Individual Pursuit. Jhordan St. George and Dominique Lovell clocked personal bests in the 500m Time Trial which were good for 11th and 16th place in a tough Pan Am field. 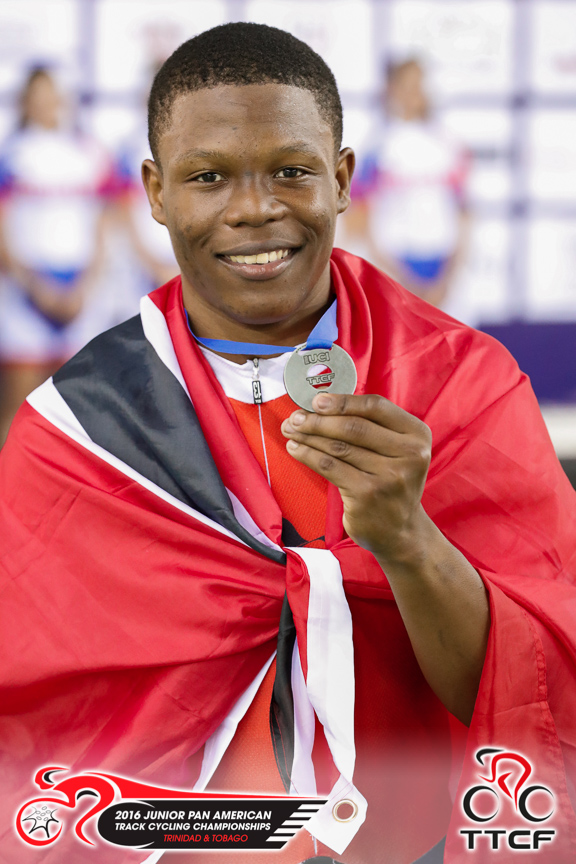 Day 3
The Women Sprint Qualification took centre stage on Day 3 of the Junior Pan Ams. St. George and Lovell clocked personal bests once again in the Flying 200m of 13.597 and 13.613 to qualify for the next round. St. George was able to fight through to the 1/8 Final via the 1/16 Repechage but was just unlucky in the 1/8 Repechage as she was edged out while competing against two Mexicans.

Jabari Whiteman also started the Men Omnium and after impressive 3rd finish in the Scratch and Individual Pursuit, he finished the first day of the 2 day Omnium event in 4th. Tyler Cole had a round Monday after falling in the Points Race event. He got back up to finish 9th while Kemp Orosco was 11th. 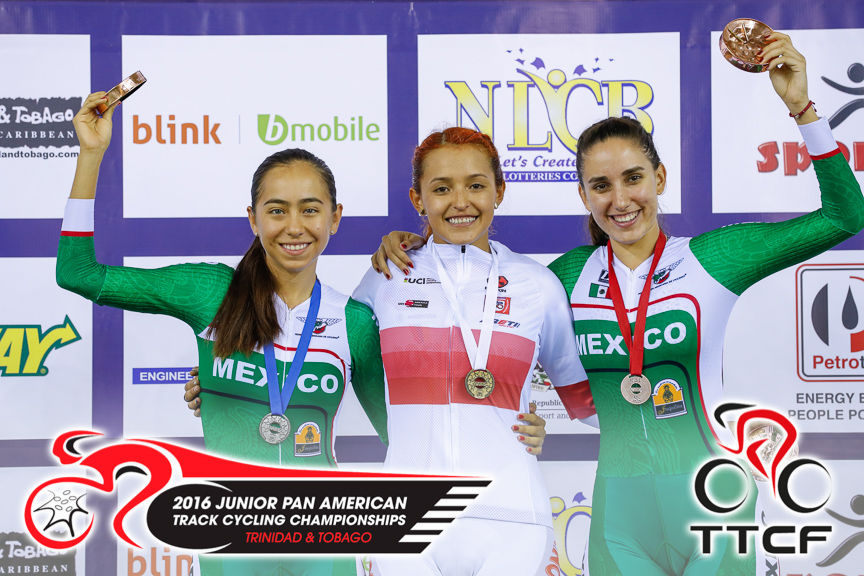 Day 4
Whiteman displayed his speed once again in the 1km TT and Flying Lap events in the Omnium winning both in blistering times, setting him up in 3rd, 2 points shy of second. His exploits in the time trials may have extended him as he wasn’t able to get onto the podium though providing a valiant effort in the Omnium – Points Race.

Nicholas Paul, Dean Woodsely and Chaquille Henry came to the centre of attention with the Men’s Sprint starting. Paul clocked the 4th fastest time in 10.643 while Henry clocked a personal best of 10.953 seconds. Dean Woodsley’s times of 11.736 was good enough to put him into the next round of Sprints.

Paul though would show his class to move into the Quarter-finals in the evening session where he dispatched of Pineda (GUA) to advance to the Semi-Finals the following day. 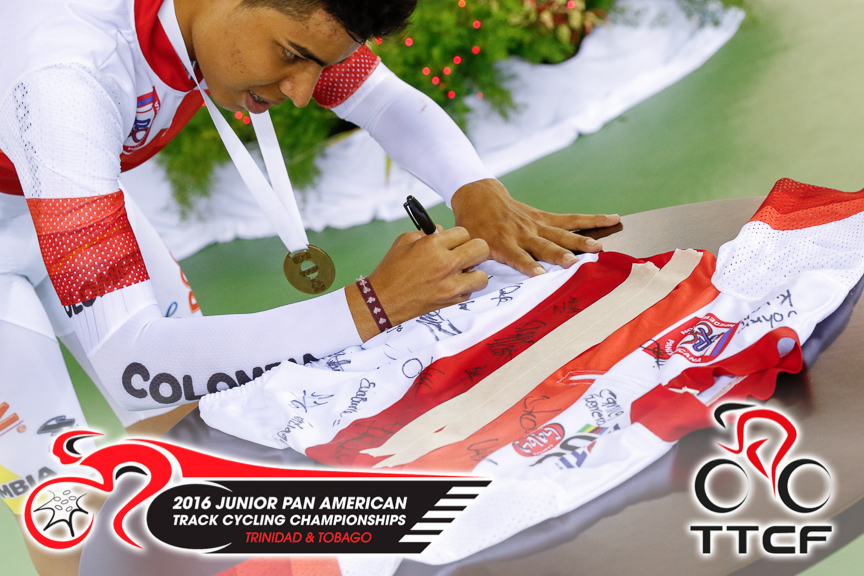 Day 5
Dominique Lovell turned heads in the Women’s Keirin as she moved her way through the Round 1 Repechage and then into the 1-6 Final after some smart riding and good positioning. In the Final, Lovell would be just out of medal positioning with a 4th place, the second best finish in a Keirin Final by female T&T cyclist.

In T&T’s first ever Madison entry in a Junior Pan Am, the duo of Tyler Cole and Jabari Whiteman fought like true champions as they remained in medal contention for most of the event. Their final 5th place finish was extremely commendable.

Nicholas Paul would save his best for last. As he rounded Quinterro (COL) on the final turn, the crowd got to their feet as they burst into celebration. The sounds of Voice – Cheers to Life rang out throughout the velodrome as T&T got their Independence Day gift – and it was a fitting one! 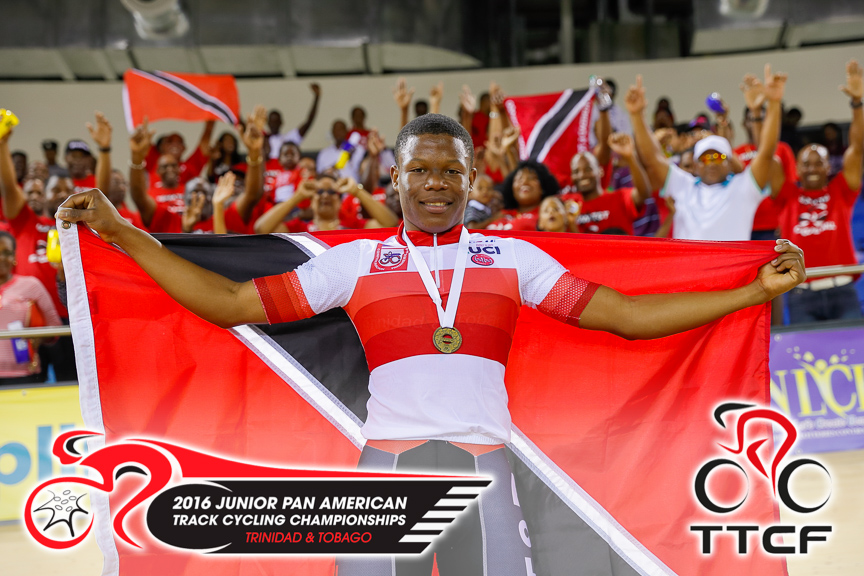 The 2016 Junior Pan American Track Cycling Championships was an experience like no other and would not have been possible without the kind contributions and partnerships with the Government of Trinidad & Tobago and Corporate Trinidad & Tobago. The TTCF and the Local Organizing Committee (LOC) for the 2016 Junior Pan Ams will like to publically acknowledge the following companies who made this event possible:

The TTCF will also like to extend our appreciation to the hard working volunteers who made this event possible. From the persons who sat around the tables as members of the Local Organising Committee that planned and executed a World Class cycling event right here in Trinidad & Tobago, to the ones on the floor scampering to ensure the event went on without a glitch; the TTCF highly appreciates your yeoman’s service.

To the officials, both foreign and local, we too thank you for your dedication to the sport of cycling.

To the 15 countries who participated at this momentous event, the TTCF thanks you for bringing world class cycling to the National Cycling Centre.

We will also like to thank the members of the media who day in, day out were at the venue and providing the excpetional coverage that the event deserved.

Lastly but definitely not the least, to the fans who supported this event; the atmosphere that you created in the velodrome was electrifying. You definitely came and roared with passion and at the end of the event; we all felt pride in hosting this event. 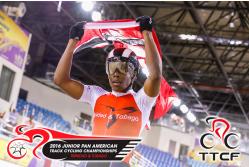