Team T&T’s Varun Maharajh once again reminded the capacity crowd at the Arima Velodrome why he is one of T&T’s top endurance cyclists after capturing the UCI 15km Scratch Race on Friday night at the 2016 Easter Grand Prix. An early break consisting Edwin Sutherland (BAR), Jose Aguirre (MEX), Gevan Samuel (Braves) and Sheldon Ramjit (T&T) formed and looked dangerous from its onset. Several attempts by the back bunch to reel the quartet back in proved to be futile as work by the T&T Team ensure that their teammate remained at the front.

With 10 km remaining, Maharajh leaped out of the pack with Gavyn Nero (Team DPS) in tow while the likes of Marloe Rodman (JAM) chases furiously. Maharajh’s class showed as he was able to connect with the lead bunch and drag them to lap the main field. With 1.5 laps remaining, Gevan Samuel left the leading 5 in a valiant attempt to capture the top prize, but Maharajh would have none of it. He rounded his fellow Trinbagonian in the final 100 metres to cross the finish line with his arms raised in ecstasy.

In the Women’s Sprint, Mandy Marquadt (USA) broke the Women’s track record in the Flying 200m qualification when she clocked a time of 12.266 seconds while young Kollyn St. George (Breakaway) clocked her personal best for the Arima Velodrome in a time of 12.642 seconds. As expected, Marquadt and St. George met each other in the final which had to go into a 3rd and decisive ride after they shared the spoils in the first two rides. The more experience of the two, Marquadt however would defeat the Breakaway teenager to capture the Women’s Sprint Crown.

The Men’s Sprint came to anti-climactic and nervy end when the top two qualifiers, Quincy Alexander (T&T) with 10.810 and David Espinoza (USA) with 11.265 seconds came down in a heavy crash as they rounded the final turn in their second ride. The two cyclists were shoulder to shoulder as they saw approximately 90m when Espinoza went down, taking out the lanky Trinbagonian in the process. Alexander would have to be rushed to the hospital after the crash while Espinoza was relegated for not holding his line in the final 200m, thus giving Alexander the Sprint crown.

Today, the Men and Women’s Keirin will be competed while the Junior Men will participate in their Elimination while the second Men’s Scratch Race will bring the curtains down on an exciting two day event. Also to look out for today, added to the Trinidad & Tobago National Team for the final day will be none other than Olympic bound, Njisane Phillip! Njisane will suit up in the Red, White & Black to give the International field an even spicier flavor!

Gates open at 3:00pm and the action begins at 5:00pm so ensure to come on down and enjoy what promises to be a spectacle! 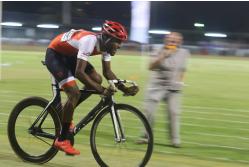