Njisane Nicholas Phillip will be returning to the Olympic stage when the XXXI Olympiad is hosted by Rio de Janeiro, Brasil this August! The Siparia native went into the final Olympic qualifier for Track Cycling, the UCI Track Cycling World Championships in London, England today needing at least a top 21 placing in the Men’s Sprint to cement his position regardless of how well his closest competitors in Hugo Barette (CAN) and Jair Tjon En Fa (SUR) performed.

Phillip clocked yet another sub-10 performance with a time of 9.969 seconds in the flying 200m at the London Olympic Velodrome to qualify 14th while Australian, Matthew Glaetzer qualified fastest with a time of 9.766 seconds. The time he clocked saw him facing a familiar foe in Edward Dawkins (NZL) in the 1/16 Final of the Men's Sprint.

Dawkins who was beaten by Phillip at this same phase of the Sprint compeition during the 2012 Olympics did not let history repeat itself as he held off a late charge by the Trinbagonian at the line. This meant that Phillip was knocked out of the competition at the 1/16 round, however, the 14th place overall will move him to 478 points, 188points clear of Barette and 243points clear of Tjon En Fa.

He will now regroup and begin his preparations for Rio in August!

The Trinidad & Tobago Cycling Federation will like to extend our heartiest congratulations to Njisane on his outstanding achievement of yet another Olympic qualification as he continues to fly the T&T flag high! The Minister of Sport, Darryl Smith, also extended his congratulations to Phillip via a facebook post which read: "Congratulations to Njisane Phillip on your qualification for the Rio 2016 Olympic Games. After all you have been through for the last three years you believed in yourself. You found a way to make it. Continue to stay focus and work hard and make Trinidad and Tobago proud on the world map." 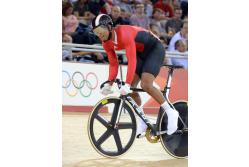