Trinidad & Tobago will be represented by a balance mixture of experience and youth when the 2016 Southern Games pedals off with its Criterium event on Friday 11th and Track cycling on Sunday 13th March. The two day affair will see T&T represented by a total of seven (7) cyclists for the two teams with the likes of endurance cyclists Akil Campbell and Gavyn Nero being featured in both the Criterium and Track National Teams.

Making his Elite National Team debut will be youngster, Tyler Cole when he puts on the red, white and black uniform for the Criterium National team. Reigning National Road Race Champion, Gevan Samuel and the consistent Sheldon Ramjit will also add the depth of experience with the Criterium team.

On the track, coming off of winning both the Sprint and Keirin races at the TTCF Track Series, Quincy Alexander will suit up in T&T colours once again. Joining him will be multiple National Champion Varun Maharajh as they do battle on the grass track at Guaracara Park, Pointe-a-Pierre along with Campbell and Nero. Team T&T will be facing off against cyclists from Colombia, Great Britain, Jamaica, Antigua &Barbuda and Barbados. 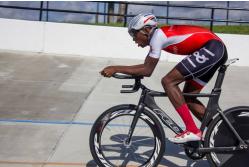