The National Cycling Centre in Balmain, Couva got its taste of intense Elite International Cycling when the third and final night of competition of the Easter International Cycling Grand Prix stopped at the venue. It was a night for the true cycling lovers as not only were the matchups and races exciting but it was absolutely encouraging to see the facility welcoming its maximum capacity of 2,500 spectators.

Hometown favourite Njisane Phillip was not going to let this opportunity go to waste in front of the appreciative crowd and in his pet event, Sprint. Earlier in the day, Phillip set a new velodrome record in the Flying 200m with a time of 10.258 seconds to eclipse Quincy Alexander’s record of 10.277 seconds set just about 5 minutes before. Previous to Monday, the record stood at 10.453secs set just three weeks prior. The steady breaking of records at the venue speaks about the benefit the facility is already having on T&T cyclists.

Phillip would defeat Kellar (Team Foundation/TTO) in the 1/8 Finals, his teammate and training partner Keron Bramble (TTO) in the quarter-finals and then 2x Olympian Hersony Canelon of Venezuela in the Semi-Finals. His trek through the phases set up a mouth-watering clash with Eoin Mullen (IRL) in the finals after the Irishman defeated Quincy Alexander (TTO) in his semi-final matchup. 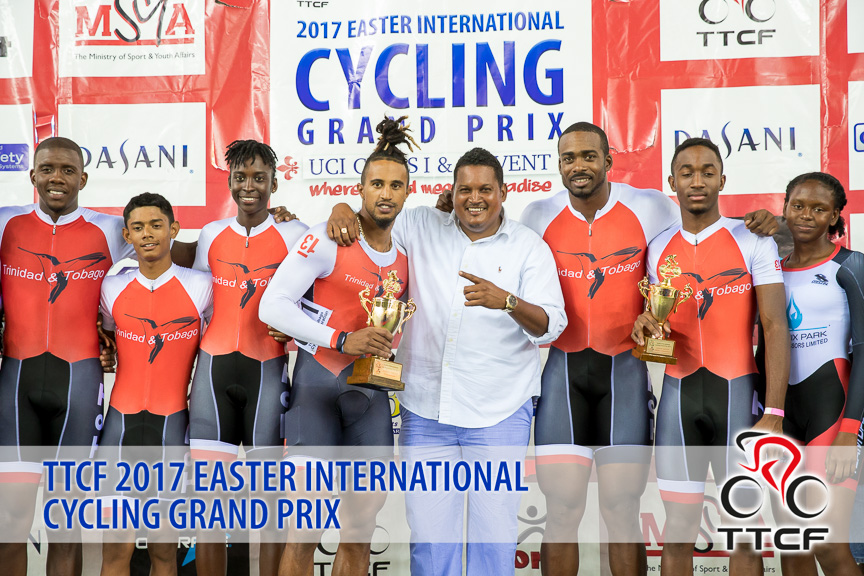 Mullen would win the first ride in the best out-of-three matchup by taking the front and leaving no chance for Phillip to overtake him. In the second ride, Phillip returned the favour to Mullen as he led out from the front to make it one all after two rides. The tension in the crowd was evident as the starter blew his whistle to commence the third ride. When the sprint started with 200m remaining, the air in the National Cycling Centre became electrified as T&T got out of their seats to cheer on Phillip who would beat Mullen by the narrowest of margins.

The result certainly elated the Siparia native as he punched the air and his chest in celebration.

Mandy Marquardt (USA) was the only cyclist for the Easter Grand Prix to defend any of the titles from 2016 as she made easy work of Diana Garcia (COL) in the final of the Women’s Sprint. Marquardt was also responsible for resetting the velodrome record in the Flying 200m for Women from 12.002 set by Andrea Ortiz in 2016 to an impressive 11.349 seconds.

Rafael Meran (Team Foundation/DOM) rode a gutsy Points Race to take the overall win in the Men’s Omnium ahead of Daniel Holloway (USA) and Saturday night’s UCI Scratch Race winner, Akil Campbell (PSL/TTO). Jabari Whiteman (TTO) once again showed his versatility as the Endurance cyclist qualified fastest in the Men’s Sprint with a time of 10.906seconds to set up a final with Junior Pan Am medalsit from 2016, Chaquille Henry (AWCC/TTO). Whiteman was just too quick as he won his title in two easy rides. 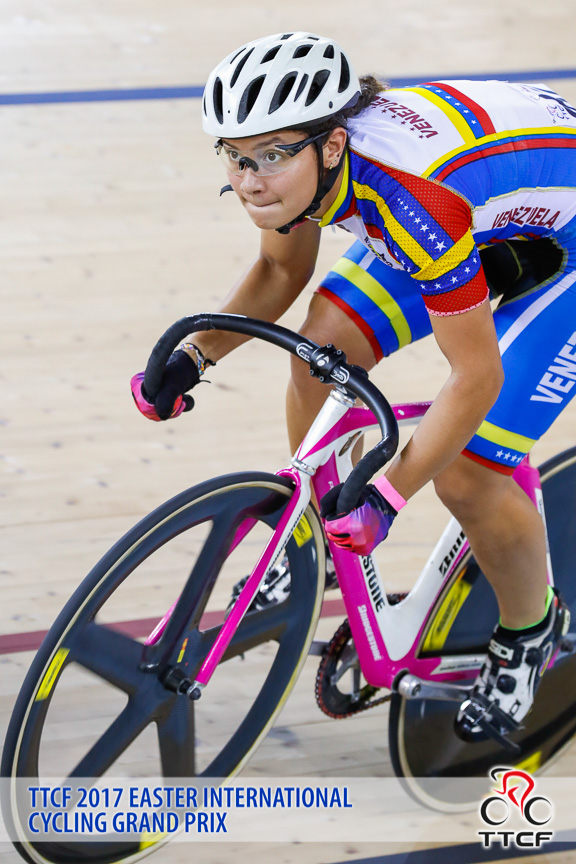 Also being announced on the night is that Trinidad & Tobago will also host the Elite Pan American Track Cycling Championships from the 30th August - 3rd September at the National Cycling Centre where some of the world's best cyclists will be here to battle for Continental glory!

The TTCF will like to take this opportunity to sincerely thank all who would have made the 2017 Easter International Cycling Grand Prix a success. To all of our Sponsors, Spectators, Volunteers, Officials, Commissaires and last but certainly not least, CYCLISTS, we say a hearty Thank You! 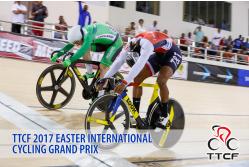