Njisane in Sprint action on Friday

T&T’s cycling ace, Njisane Phillip will place his bike on the track tomorrow afternoon at the Rio Olympic Velodrome when he enters the Men Sprint event.

The first round or the qualifier for the event consists of a time trial over the final 200m of the track or otherwise known as the Flying 200m. The event is scheduled to be begin at 4:14pm (3:14pm T&T Time) while Phillip will attempt his effort as the 14th of 27 cyclists. The top 18 cyclists will advance to the 1/16 round where the fastest meets the slowest in a one-off matchup.

The winners of each matchup will automatically advance to the 1/8 Final on Saturday afternoon. The losers of the 1/16 final will face off in a three-man repechage heat to determine who will make up the final 3 cyclists in the 1/8 final. 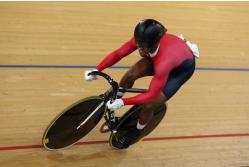