Njisane Phillip marched into the Semi-Finals of the Men Sprint tomorrow after an almost flawless display at the Parque Penalolen velodrome in Chile today. Phillip opened the day with a blistering time of 9.850 seconds in the Flying 200m; his time only bettered by World Ranked #5 Hersony Canelon (VEN) with a time of 9.790.

Also competing in the Flying 200m was Kwesi Browne and Quincy Alexander for T&T. Browne clocked a personal best of 10.209 as the 15th fastest overall while Alexander was 18th fastest in a time of 10.280. The 1/16 Final saw Phillip defeat Victor Espinoza (CHI) while Browne and Alexander were bettered by the Canadian pair of Evan Carey and Joseph Veloce.

Phillip continued his form by dispatching Anderson Parra (COL) in the 1/8 final to set up a date with Pablo Perrochoud (ARG) in the quarter-finals. The Argentine who grabbed silver in the Sprint and Keirin at the 2015 Easter International Grand Prix in Trinidad earlier this year, came into contact with Phillip’s rear wheel in the first ride and went down hard, forcing him to withdraw from the competition.

Phillip will now face Hugo Barette (CAN) in the Semi-Final of the Men Sprint on Sunday afternoon from approximately 4:00pm (T&T Time). This matchup comes with great history as just two months ago Phillip and Barrette faced off in the Finals of the Men Sprint at the Pan Am Games in Canada. In the second Semi-Final, the South American giants of Fabian Puerta (COL) and Hersony Canelon (VEN) will do battle

Varun Maharajh competing in the Omnium placed 7th in the 1km Time Trial and 8th in the Flying Lap to position himself into 8th place overall going into the final event, 40km Points Race. Maharajh, in a similar fashion to yesterday’s final event displayed good endurance to finish 4th in the Points Race, compiling an additional 30 points towards his total. In the end however, his overall place would see him at 7th overall a few points short of a podium finish.

Tomorrow, the 5th and final day of the Elite Pan Ams will also feature Aziza Browne and Jodi Goodridge compete in the Women Keirin while Varun Maharajh and Akil Campbell will line up in the Men Madison. 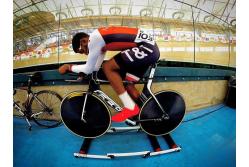