Njisane knocked out in 1/16 final

It was somewhat of an anti-climatic end to Njisane Phillip's second Olympic appearance after clocking his fastest sea level time of 9.813 seconds earlier in the day. Phillip went on into the 1/16 Finals but was ousted by Chao Xu (CHN), therefore facing him up against Levy (GER) and Dawkins (NZL).

The 6th fastest qualifier though just could not hold off the German and Kiwi, therefore seeing him bowing out of the competition at the 1/16 Final and being placed 13th overall.

The TTCF extends a hearty congratulations to Njisane firstly for qualifying T&T for a second straight Olympics and as well for your performance in Rio. Though this may not have been the result that you worked for or deserved, these are used as learning points that we all grow from. Congratulations once again! 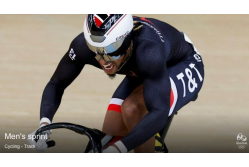