T&T’s top sprint cyclist, Njisane Phillip did himself a favour at the final leg of the 2015/2016 World Cup Season with a solid 8th place finish in Hong Kong over the weekend. The finish handed him a valuable 82 points towards his Olympic Qualification bid and as well placed him in a comfortable lead ahead of his closest rivals with just the 10th and final Olympic qualification event remaining; UCI World Track Cycling Championships in London, England from the 2-6 March, 2016.

Phillip turned heads from early in the Sprint qualification after breaking the 10-second barrier with a blistering time of 9.990 seconds. His qualification effort was only bettered by Damien Zielinski (POL) who clocked 9.919 seconds. Phillip eased into the quarter-finals after dispatching Juan Peralta Gascon (ESP) and Erik Balzer (GER) in the 1/16 and 1/8 Finals respectively.

However, he met a worthy opponent in Chao Xu (CHN) in the quarter-final rounds. He was unable to get past the Chinese cyclist and thus had to settle for competing in the 5-8 Finals later in the night. Coming up against Kamil Kuczyinski (POL), Nikita Shurshin (RUS) and Callum Skinner (GBR), Phillip would finish just behind them. 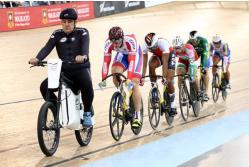