Paul back from Aigle and looking forward to 2017

Fresh off the plane en route from Aigle, Switzerland, from frigid temperatures at the foothills of the Swiss Alps to the humid, fever pitch climate of the Tropics in the space of a few hours, Nicholas Paul has returned home. T&T’s youngest star was back from his 2.5 month training camp at the UCI World Cycling Centre and was already at the National Cycling Centre in Couva going through his paces with coach, Anthony Sellier on Saturday.

www.ttcyclingfederation.org was able to catch up with the young sprinter after his morning session in Couva as the Gasparillo native, visibly bigger in stature is ready to build on his recent high performance camp.

Paul cited that the biggest challenge in Switzerland was adjusting to the temperatures and being able to have the mental fortitude to fight through the difficult mornings and sessions. However, as he continues to be positive he also recognizes the role that he now plays as not only as a bigger than life thespian of some sorts in the eyes of younger cyclists but in the hearts of an attentive support base.

With eagerness in his eyes, Nicholas lavished the thought that Elite Pan American Championships would be held for the first time on home soil, he promised to work hard at repeating his Junior Pan American heroics on Independence weekend this year. With his main goals being to continue to work hard towards qualifying for the National Team, there is no doubt that this young lad has the right head on his shoulders and a strong support system with him throughout his journey. 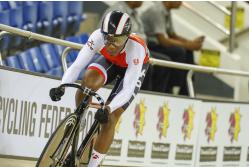