Paul, Browne double up on Day 4 of Track Nats

Nicholas Paul (Breakaway) and Kwesi Browne (AWCC) respectively captured their second National Crown in as many events tonight when Day 4 of the National Track Championships for Elite and Juniors rolled into the Arima Velodrome.

Paul and Browne continued their fine run of form after they snatched their respective categories’ Sprint titles on a warm Sunday evening in Arima. Paul advanced to the Final after dispatching Chaquille Henry (AWCC) to face off against Je’Land Sydney (Team Kallisto FCV) who got past Dean Woodsley (Petrotrin) in the Semi-Final round. The much anticipated final did not disappoint as both rides went down to the final few metres with Paul being the stronger of the two in straight rides.

Kwesi Browne booked a spot in the Final after beating Akim Constantine (Team DPS) in two straight rides. That setup yet another anticipated final against Keron Bramble (Sonics) who got past Thireef Smart (Petrotrin) in three rides during their Semi-Final matchup. Bramble would take the first ride against Browne after he was able to get to the Sprinter’s lane first, shutting down Browne’s attempt to get past him. The second ride however, Browne left no room for error as he blew past Bramble on the back straight, leaving no chance for Bramble.

In the third and decisive ride, Bramble tried to get the jump on Browne, but the Arima native was just too quick and too good on the night as he rode away with the National title. 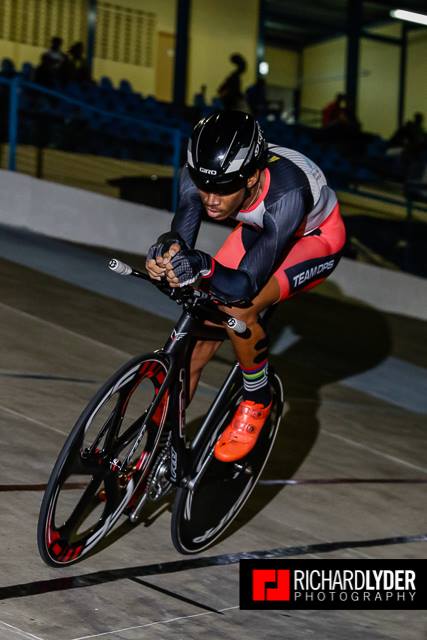 The battle between Kollyn St. George (Breakaway) and Keiana Lester (BikeSmith) had the crowd lapping up for more. After St. George went a ride up, Lester decided to take the sprint long, jumping her counterpart with 500m remaining. The reigning Junior Pan American 500m Time Trial Champion kept Lester in close contact to eventually round her in the final 100m to take the crown in straight rides. Kollyn’s younger sister, Jhordan, was also victorious on the night after she defeated Dominique Lovell (AWCC) in two straight rides in the Junior Women Sprint Final.

The crowd was also treated to some comedic intermission entertainment with the return of the "Man in Blue" who attempted a standing 250m run for a "superhero". His race had the entire crowd in stiches, especially during his post race interview when he began begging for bottled water.

After the "Man in Blue" record attempt, Tyler Cole (Team DPS) set a blistering personal best at Arima of 3:50.217 for a 3km Individual Pursuit as he easily rode away with the National title. His teammate, Gavyn Nero was equally successful in the Elite Men 4km Individual Pursuit after he improved his qualifying time by seven (7) seconds to capture the title ahead of James Hadeed (Heatwave).

The 5th and Final day of the Elite & Junior National Track Cycling Championships will commence at 7:00pm on Monday 9th with the Standing 250m for Juniors, Time Trial for all categories and closes with the Points Race for Elite and Junior Men. 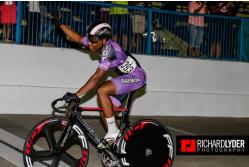