Njisane Phillip roared into the finals of the Elite Men Sprint after easily dispatching Flavio Cipriano (BRA) in the Semi-Final round. Phillip who qualified 0.2 seconds faster than Cipriano, took the first ride after tactically outsprinting his Brasilian counterpart.

Phillip was warned for entering the sprinter's lane while Cipriano occupied it with approximately 300m remaining, a close call to say the least. In the second ride, Phillip left nothing to chance, gauging his opponent and pouncing with a lap remaining. As they sped down the backstraight, Phillip rounded Cipriano, easily taking the ride and the matchup in 2 heats.

Phillip will face a familiar face in the hometown favourite, Hugo Barrette in the final. Barrette and Phillip were former teammates when both cyclists were based out of the Stub Hub Center in Los Angeles, California. Barrette also has one up on Phillip at the Milton Velodrom after defeating the Trinbagonian at the Milton International Challenge in January this year.

The matchup is a mouth watering affair with two former teammates going at each other for Pan Am Gold! 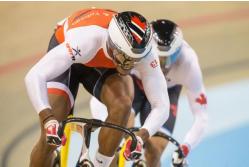