In what can be described as one of the toughest World Cup seasons, Njisane Phillip pulled off an incredible 6th place in the Sprint and 13th in the Keirin after two hard days of racing in New Zealand this weekend.

The Siparia native qualified 12th fastest in the Sprint with a nippy time of 10.005 seconds, a needed improvement from his time in Cali, Colombia at last month's World Cup which was hindered by a tooth ache. Phillip got past long time rival, Hersony Canelon (VEN) in the 1/16 Final but lost to eventual winner Matthew Glaetzer (AUS) in the 1/8 final. Not downing himself, he got back up and defeated Pavel Kelemen (CZE) and Chao Xu (CHN) in the repechage to earn a place in the quarter-finals.

He had a tough draw with Max Niederlag (GER) but couldn't get around the German therefore he was placed into the 5-8 Final against Zielinski (POL), Webster (NZL) and Constable (AUS). With a great turn of speed in the last 1.5 laps, he rounded both Constable and hometown favourite Webster but just ran out of space before he could pass Zielinski, settling for 2nd in the heat and 6th overall.

This performance gives his huge qualification points towards his Olympic qualification with just the 3rd and final World Cup in Hong Kong (15-17 Jan) and World Championships in London (2-6 March) remaining. He will now return to his base to start preparations for the next event through the Christmas holidays.

Speaking to Team Manager, Gary Acosta, he indicated that, "Njisane was well prepared by his support crew and the points he allocated has put some breathing room between himself and his COPACI rivals in the Sprints." 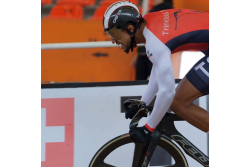