The heavens opened up with just about 30 minutes remaining in the 2nd session of the National Track Championships for Juvenile and Masters cyclists at the Arima Velodrome. The rains postponed the completion of the Masters 40-44 Scratch, Masters 45-49 Scratch and the much anticipated Keirin Finals for Juvenile Men.

The likes of Jabari Whiteman (Southclaine), Dean Woodsley (Petrotrin) and Justin Baptiste (Breakaway) all easily advanced to the Finals of the Keirin after comfortably finishing in the top 3 of their respective heats to serve up a mouth-watering clash. Aaron Alleyne (Sonics), Tyris Adams (Petrotrin) and Tirik Primus (AWCC) were also eagerly awaiting the finals before the rain came down. The final therefore will be contested during the 3rd and final day of the National Championships.

Earlier in the day, Whiteman continued in his winning ways after snatching the 2km Individual Pursuit in a New National Record with a time of 2:32.080 while Enrique De Comarmon (Heatwave) was also impressive in 2nd with a time of 2:36.783.
Gregory D’Andrade (PSL) pull out all of the stops to win the Masters 55-59 Individual Pursuit while Robin Samuel (The Braves) timed his break to perfection as he marched away with the Scratch Race for the Masters 55-59.

Roger Malco (Team Foundation) was the top Masters 45-49 Pursuiter while Cyril Fook won the Pursuit and Scratch for Masters 60-64 to make it three from three. Wayne Samuel (Hummingbirds) rode away on a solo break to capture the Masters 55-59 Scratch Race.

Tomorrow’s session begins at 4:00pm with the Masters 40-49 Scratch Race and the Finals of the Juvenile Men Keirin. 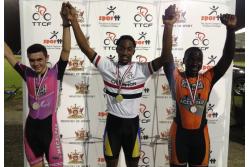