Day 3 of the National Track Championships for Elite and Juniors saw records come tumbling down in the Flying 200m and Flying 250m tonight.

Nicholas Paul (Breakaway) heated up the track with a blistering time of 11.173 to eclipse Quincy Alexander’s 2011 Arima Velodrome record for Junior Men of 11.184. Paul will face Chaquille Henry (AWCC) in the Sprint Semi-Final on May 8th while Je’Land Sydney (Team Kallisto FCV) will face Dean Woodsley (Petrotrin) after clocking 11.433 and 11.891 respectively.

Kwesi Browne (AWCC) qualified fastest in the Elite Men with a time of 11.105 to set up a Semi-Final heat versus Akim Constantine (Team DPS) while Keron Bramble (Sonics) will face Thireef Smart (Petrotrin) in the second heat. The Elite Women Sprint Final has a mouthwatering matchup between Kollyn St. George (Breakaway) and Keiana Lester (BikeSmith) after the two set respective Arima Velodrome personal best times of 12.578 and 12.609.

Jabari Whiteman (Southclaine) fended off all of Tyler Cole’s (Team DPS) attempts in the final event of the Junior Men Omnium – Points Race to walk away with the National title. Earlier in the night however, Whiteman smashed the Junior Flying 250m record with a time of 14.326 which erased Justin Roberts’ 2013 record of 14.705 seconds and was once again impressive in the Omnium IV - 1km Time Trial with a time of 1:09.790. 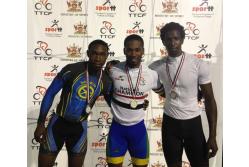