Remember names such as Dean Woodsley, Tyler Cole, Chaquille Henry, Justin Baptiste, Jabari Whiteman and D’Angelo Harris to name a few, because in a few years you will be hearing these names on a world stage!

Baptiste (Breakaway) was most impressive in the Tinymite category as Day 1 of the National Youth Championships pedaled off at Skinner Park, San Fernando. He set a new age group record for the Tinymites (13-14 years) in 500m Time Trial in a blistering time of 37.24 seconds. At the time, the record was also the age group record for the Juvenile (15-16 years) category until up stepped Chaquille Henry (AWCC) as the first cyclist in the Juvenile category.

Henry would set the standard high with a nippy 37.06 second time. He held the age group record for approximately 5 minutes until Tyler Cole (Sonics) bettered that time after clocking 36.72, becoming the first Juvenile cyclist to break the 37 seconds barrier in Skinner Park.

Cole, however, would relish in that celebration for just about 5 minutes until the Petortrin cyclist, Dean Woodsley would create the upset of the night clocking a time of 36.40 seconds to take Gold in the Juvenile cyclists.

The showdown between Jabari Whiteman (Southclaine) and Tyler Cole (Sonics) in the 1600m Pursuit was much anticipated and it did not disappoint with Whiteman taking Gold in a time of 2:04.59, just 18hundreths of a second faster than Cole in 2:04.77.

Day 2 of the Championships starts at 2:00pm on 11th July with the Sprint and Scratch Races to be contested and it promises to be even more fireworks. 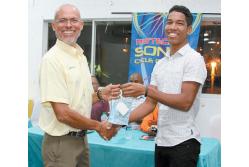