Silver Njisane in Pan Am Sprint

Njisane Phillip captured Silver in the Men Sprint against some of the world’s best track cyclists on Sunday in Chile.

Phillip marched his way into the Semi-Final on Saturday after convincing wins over Espinoza (CHI), Parra (COL) and Perrochoud (ARG) to set a rematch with Pan Am Games champion, Hugo Barette (CAN). Phillip’s former training partner got the upper hand back in July at the Mattamy Velodrome in Milton, Ontario when he pipped the T&T speedster for Gold.

This time, it was revenge well served. Barette, however, looked to have been scheduled for a repeat after he won the first ride, holding off the late challenge by Phillip. In the second ride, Phillip took to the front with 375m remaining and despite a surge by the Canadian in the final 50m he couldn’t get past; pushing the event to a 3rd and final ride.

Barrette started the 3rd ride with an accelerated pace as he tried to fend off a late rush from Phillip. The turn of speed from the Trinbagonian was just too much as he was able to pip Barrette on the line, advancing to face Fabian Puerta (COL).

In the final, Puerta would pip Njisane in a photo finish to go one ride up. Phillip was unable to repeat his Semi heroics in the second ride and thus had to settle for Silver which also provides provides him with valuable UCI points towards his World Cup and Olympic qualification.

Earlier in the day, Aziza Browne and Jodi Goodridge tried valiantly but couldn’t advance to the semi-final of the Keirin after both finishing 4th in their respective repechage heats. Later tonight, Varun Maharajh and Akil Campbell will become the first T&T cyclists to compete in the Madison race at a Pan Am Championships 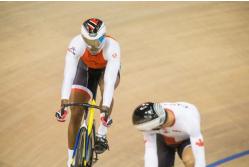