From as early as 4:00am (T&T Time) on Thursday morning, young Sei Daniel will line up in Heat #3 of the Men’s Keirin at the UCI Junior World Track Cycling Championships. The event hosted in the Kazkh capital of Astana, will see 37 cyclists from all over the world line up for the Men’s Keirin.

Daniel will face stiff competition in his heat from Jiri Janosek (CZE), Michal Lewandowski (POL), Melvin Landerneau (FRA), Ayrton De Pauw (BEL) and Danilo Magnoni (ARG) with the winner of each heat advancing to the second round. All other cyclists will have to face off in the repechage in order to gain a qualification spot into the next round. 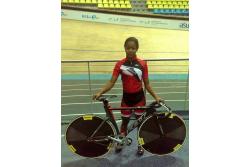