The trio of Kollyn St. George, Sei Daniel and Keiana Lester would be taking the Junior World Championships as a definite learning and challenging experience. Though the T&T contingent was unable to medal at the perennial competition of the world’s best Junior track cyclists, their performances were worthy to note.

St. George placed 13th and 23rd overall in the 500m Time Trial and Sprint events overall, while Daniel was unable to make it past the 1st Round of the Keirin and the Sprints. Keiana Lester, had to be the most disappointed of the three as she was unable to compete due to an injury suffered during her last training session in Astana.

In their last event as Junior cyclists, they will now prepare for the Elite ranks at the start of the 2016 season but the Junior Worlds however would serve as the first stepping stone on the journey for Tokyo2020 Olympic Qualification. Our Juniors have measured up and have identified the leading and lagging factors to ensure that they secure that Olympic qualification.

The completion of the National Cycling Centre in Balmain, Couva will obviously be one of the requirements necessary to close the gap between T&T and the world cycling powerhouses. This also coupled with a National High Performance Structure staffed with full time coaches, managers, mechanics, nutritionists, physiotherapists and sports psychologists are all key necessities to ensure the success of the multi-million dollar centre.

The experience of such a high level competition for the Junior team will also serve as a good understanding of how these events operate. Hopefully, in the coming years we can be cheering the St. Georges, the Lesters and  the Daniels as they race for Gold! 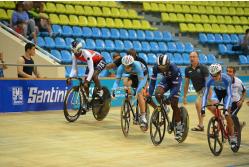