The first World Cup of the 2015/2016 season pedals off tomorrow afternoon in Santiago de Cali, Colombia with T&T fielding a strong trio of Jude Codrington, Kwesi Browne and Justin Roberts in the Elite Men’s Team Sprint.

T&T, who are currently ranked 18th in the World in the Team Sprint after a solid 4th place finish at the Elite Pan Am Champs in September, will hit the 250m track in the second heat of eleven. Ironically or maybe acting as a sign, the red,white and black have been granted a path for revenge after they were paired off in the same heat with Brasil, the same team who narrowly snatched bronze from them in September.

In total, 21 teams will contest the qualifying round of the Team Sprint with the fastest two teams facing off for Gold and Silver, while the 3rd and 4th fastest teams face off for Bronze later in the afternoon. T&T is expected to make their effort at approximately 4:15pm (T&T Time).

Stay tuned to the TTCF Facebook page for all your updates! 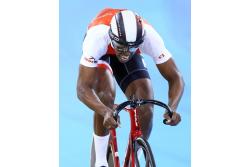