The Team Sprint trio of Jude Codrington, Njisane Phillip and Kwesi Browne have placed themselves within an earshot of a Pan American medal after qualifying 3rd fastest in the Men Team Sprint earlier today. The trio, qualified with a nippy time of 44.441 seconds, just behind Canada (44.305) and Venezuela (43.959).

#TeamTTO faced Brasil in the ride off for bronze where they were just beaten, clocking a time of 44.527, just behind Brasi's 44.437 seconds. T&T had not make it into the medal round of the Team Sprint since the Azikiwe Kellar, Christopher Sellier and Njisane Phillip copped bronze in the 2010 edition hosted in Aguascalientes, Mexico. Favourites for a medal, Colombia were disappointingly out of the medal hunt after they clocked the 5th fastest time with 44.506 seconds.

Earlier in the morning, T&T's debut in the Team Pursuit at an Elite Pan Am saw the quartet of Varun Maharajh, Akil Campbell, Jovian Gomez, and Gavyn Nero circling the 250m velodrome 16 times, clocking a new national record of 4:28.202. The time bettered the previous national record by 14.5 seconds clocked earlier this year in May.

Campbell, Nero and Gomez have been under the guidance of Endurance Coach, Ashton Williams for the past months which also included reserve cyclists, Kasim Charles-Walcott and Marc Pogson. With Maharajh's training base situated in Denver, Colorado, he was only able to train with the team fully the day before the event. The time therefore, the 7th fastest on the day, is a good stepping stone and foundation for the growth of the Team Pursuit in Trinidad & Tobago.

Unfortunately, the Elite Women Team Sprint were disqualified for an improper exchange during their first transition. The event saw Mexico qualify fastest in a time of 33.900 seconds. 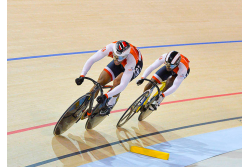