Alexander was the first to start off T&T with a blistering start when he blew away all competition to take the 500m Finals for International Men ahead of Roberto Serrano (MEX) and Andrew Leverton (GBR). Alexander would go on to make it two out of two when he met Serrano in the final of the Match Sprint. The Arima native eased away with the win in two straight rides while Leverton defeated Diego Romero (COL) for bronze.

After, it was Maharajh and Campbell’s turn to shine as the duo planned the execution of the Elimination event perfectly to finish 1-2 with Campbell marginally edging Maharajh on the line as they both crossed with their hands raised. In the 2000m event for International Men, with 1 lap remaining, everyone in the venue accepted that John Croom (USA) was the victor after he opened a half lap lead on the bunch; everyone but Varun Maharajh.

Maharajh leaped out of the bunch with one lap remaining and quickly closed the gap, rounding Croom, Marloe Rodman (JAM) and Antonio Torres (CHI) on the home straight to take the victory.

The curtain closer, 10,000m for International and Invtational saw Jose Rivera (CHI) go out on solo mission to lap the bunch. Rivera would go on to win the event but a final lap kick by Maharajh and Campbell got the Guaracara Park on to their feet as they cheered on the T&T duo secure 2nd and 3rd respectively.

Madeline Moore (GBR) was most impressive in the Elite Women category as she snatched both events with Teniel Campbell (Team DPS) in closed seconds for both events. 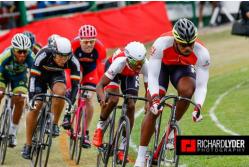