It was a total team effort by the Trinidad & Tobago National Team on the second day of the 2017 Easter International Cycling Grand Prix at the Arima Velodrome. Quincy Alexander started it off just right for the red, white and black when he clinched an exciting Men’s Keirin Final.

With less than a 100m to go, Alexander along with Njisane Phillip (TTO), Hersony Canelon (VEN), Thireef Smart (Breakaway) and Dominic Suozzi (USA) were all alongside each other at top speed sprinting to the finish line. Alexander was adjudged the winner in front of a crowd that was brought to their feet and it would take the photo finish to split the remaining four as Phillip would win Silver and Canelon Bronze. 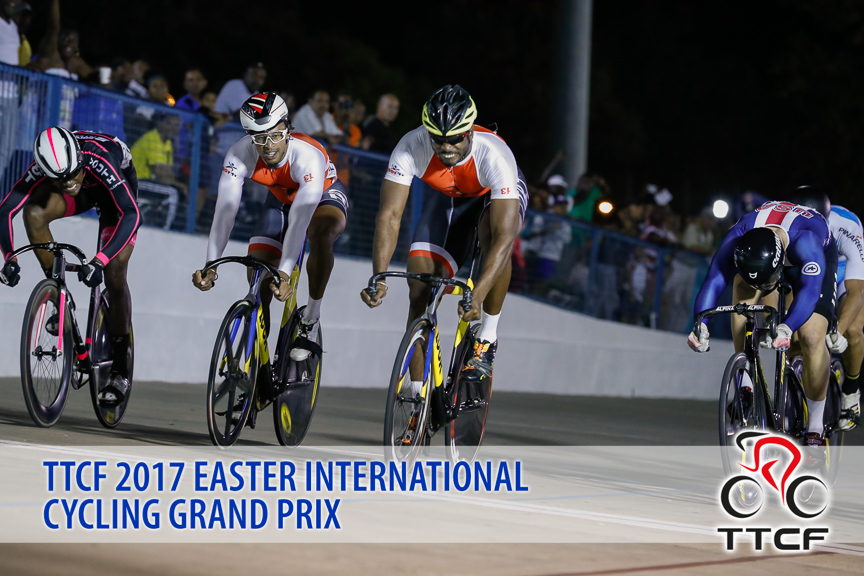 Teniel Campbell (TTO) once again showed her mettle after bouncing back from a 3rd in the Elite & International Women2 Lap to win the Unknown Distance, Elimination and the 12 Lap event. For once again displaying fine cycling form and her consistent podium finished, Campbell was named the Most Outstanding International Lady for the EGP2017.

Starlet, Jabari Whiteman (TTO) was just edged by Javier Aguero (VEN) in the International Men Unknown distance but still gained enough points to be named the Most Outstanding International Male cyclist for the EGP2017, a huge feat only as a first year junior cyclist.

In the UCI Scratch Event, Akil Campbell (PSL) timed his jump to perfection with just about 200m to go as he led out the sprint for home. Campbell’s jump proved too strong as he rode away with the win with Daniel Holloway (USA) taking second and the young Junior cyclist, Kemp Orosco (TTO) grabbing bronze for T&T.

The third and final day of #EGP2017 culminates with the grand finale on Monday 17th April at the National Cycling Centre with two sessions from 10:00am and 5:00pm. Admission for the morning session is FREE for all patrons while the 5:00pm session is $50 for adults and $10 for kids under 12. All senior citizens, 65 years and over are also free with their ID.