The Pan Am Championships' podium gave T&T a cold shoulder for 4 days. However, when the 2015 Elite Pan American Track Cycling Championships came to an end on the fifth and final night on Sunday in Santiago, Chile, T&T walked away with 1 Silver and numerous close podium finishes. T&T’s lone Silver came from Njisane Phillip who rode exceptionally well throughout the Championships.

Phillip was also just short of a medal in the Keirin when he was pipped on the line into 4th but still gaining valuable UCI points towards our Olympic qualification. The Male Team Sprint as well fell just 9 hundredths of a second from earning T&T’s first Team Sprint medal since 2010. The Trio of Jude Codrington, Kwesi Browne and Phillip qualified 3rd fastest to meet Brasil but just couldn’t step onto the podium.

T&T also featured several debutants at the Championships inclusive of the Campbell siblings, Akil and Teniel, Aziza Browne, Jodi Goodridge & Gavyn Nero. The Campbells displayed good endurance to finish within the top 10 in their respective events with Teniel setting a new National Record in the 3km Individual Pursuit for women.

Varun Maharajh last push in the Omnium VI – Points Race saw him falling a mere 10 points from a medal position, however, his placing should provide him with enough points to qualify T&T for the UCI World Cup Series starting in October.

The Trinidad & Tobago Cycling Federation saw this event as a dual pathway; Rio2016 Olympic Qualification for our top tier Male Sprint cyclists and building a solid foundation for our drive to Tokyo 2020 and beyond.

It was the first time that T&T had a Team Pursuit representing us at Elite Pan Am Championships where they shattered the previous National Record by 15 seconds. Though this may not have placed them into a medal position, the experience gained and the quality of Junior endurance cyclists within our ranks raises our hopes of a potential Team Pursuit qualification for the XXXII Olympiad in Japan.

With respect to the immediate future, Njisane’s 2nd place in the Sprint and 4th in the Keirin also provides him with a healthy number of points towards his drive for Olympic qualification. The finishes as well sows up a guaranteed 2015-2016 UCI World Cup Series qualification which also serve as Olympic qualifiers.

With the opening of the velodromes at the National Cycling Centre and Irwin Park Sports Complex soon, the expectation is for T&T performances to now excel. 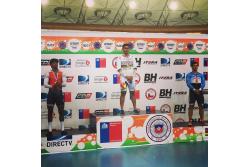