The UCI sanctioned “Keirin Revenge” held at the Valley Preferred Cycling Centre on Friday night was the last UCI event for the action packed season in Trexlertown, Pennsylvania. The 333m outdoor track, has been home to over 5 UCI sanctioned events during the American summer and T&T cyclists were in  the search of last minute UCI points before the World Cup qualification close off of Sept 14.

The Keirin saw five T&T cyclists on their start list; Kwesi Browne, Njisane Phillip, Jude Codrington, Quincy Alexander and Justin Roberts as part of a strong field with cyclists from as far as Australia and New Zealand.

The first round saw Browne qualifying for the final through the first heat with Phillip and Codrington qualifying through the second heat. Both Alexander and Roberts missed out with 4th place finishes in their respective heats and thus faced the starter in the 7-12 Final.

With these three T&T cyclists along with Joel Archambault (CAN), Jeremy Presbury (NZL) and James Mellen (USA) in the Final, it was shaping up to be a Red, White and Black day. An so it was, as they rounded the las turn, a train of red emerged with Kwesi Browne taking top honours ahead of Njisane Phillip and Jude Codrington respectively.

Click here for full results of the Keirin Revenge 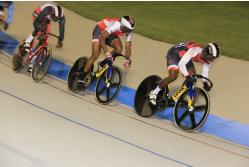