T&T cyclists continue to ascend further up the World Ranking published by the Union Cycliste Internationale (UCI). The latest update, as of 14th September 2015, T&T is featured in the top 100 in most of the Olympic events as the push for Rio 2016 enhances.

T&T’s strong performances at the Elite Pan American Cycling Championships in Santiago, Chile is one of the main reasons which we are seeing some of our cyclists maintain or advance their world ranking at an average of 17 spots per cyclist/per event.

Below is the list of T&T cyclists within the top 100 in the world:

In the Junior category, Kollyn St. George and Keiana Lester’s triumphant year at the Junior Pan Ams and National Championships has propelled them into unprecedented top 10 placings among the world’s best Junior Women cyclists.

Below is the list of T&T Junior cyclists within the top 50 in the world: 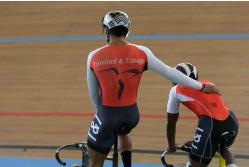