The Trinidad & Tobago Cycling Federation is proud to announce the National Team who will represent Trinidad & Tobago at the second leg of the 2015/2016 UCI World Cup Series to be hosted at the Avantidrome Velodrome in Cambridge, New Zealand from the 4-6 December, 2015. Njisane Phillip will be T&T's lone cyclist flying the red, white and black in the Sprint and Keirin events.

The TTCF received late notification of an available spot in the Men's Omnium for this World Cup, however, due to the time required to apply, process and receive a New Zealand visa, the TTCF were not able to accept said offer.

Phillip, who is in poise positions to qualify Trinidad & Tobago for the Sprint and Keirin at the 2016 Rio Olympics will be looking to put on a good display at the World Cup in order to bolster those chances. Phillip, who is already in New Zealand undergoing last minute preparations and acclimatisation is accompanied by Team Manager, Gary Acosta and Team Mechanic, Elisha Greene. 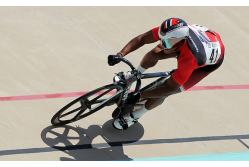