The first leg of the 2015/2016 UCI World Cup Series pedals off on the 30th October in Santiago de Cali, Colombia. The South American hub for cycling will see cyclists from throughout the world battle over three days in all of the Olympic type events.

After battling for almost nine (9) months, T&T earned qualification for the Sprint and Keirin events at the annual series and thus will be fielding a team of four (4) at this crucial Olympic qualifier. With only four more Olympic qualification events to go, each leg of the World Cup series becomes that more important.

Leading the field is Pan Am Games silver medalist, Njisane Phillip who will represent T&T in the Sprint while Kwesi Browne will line up in the Keirin. Browne will also team up with Justin Roberts and Jude Codrington as they face the starter in the Team Sprint event. 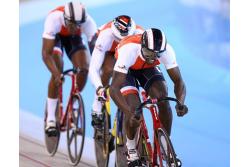