It was announced earlier this week that Natasha Hansen is leading the Rider of the Year competition at Valley Preferred Cycling Center, tallying 35 points.

The Kiwi didn’t tack on any more ROY points, but she did pocket some UCI points Friday night as she defeated Mandy Marquardt in the first two final rides to earn the victory in the UCI pro women’s sprint competition on UCI Champions of Sprint Golden Wheel Race at VPCC.

Jair Tjon En Fa of Suriname, where they do not have track cycling, won the pro men’s UCI sprint competition, besting Trinidad’s Njisane Phillip in the first two rides of the final.

There was some excitement in the evening sprints session involving the men’s runner-up as Phillip set a new flying 200m track record for the men. Phillip’s time of 10.211 bested Eddie Dawkins time of 10.22, which the Kiwi set just one week ago.

There were a lot of cheers and barks in T-town on Friday night as it was VPCC’s Dog Day of Summer presented by Working Dog Press. Canines were welcomed to the Concrete Crater and the first 200 fans through the gates received stress bones courtesy of Working Dog Press.

The pro men competed in a SuperSprint Elimination, which was won by Sam Webster. Country-mate Simon Van Velthooven took second.

The final race of the night, was not UCI affiliated, but it was arguably the most entertaining. It was the pro men’s 2km Golden Wheel Final, which was a handicap race. The leaders were neck and neck down the stretch with non-stop action on every turn of the track. At the finish line, it was Sam Webster who just had enough in the tank to best Hall for the win. Jeremy Presbury took third place.

The future stars of the World Series of Bicycling series got their time under the Friday night bright lights as well. Marcy Bardman won the 4 Lap Golden Wheel Final. Justin Butsavage finished in second place.

The final UCI event of the 2015 World Series of Bicycling season at VPCC is next week with the UCI Keirin Revenge. The penultimate week of the 2015 WSB season will feature keirin style racing, with some UCI points there for the taking. Allentown Knockerballs will be in T-town that evening, which should not disappoint. Gates open at 6 p.m. with racing beginning at 7:30 p.m. 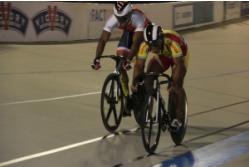