The night started off with Justin Baptiste (Breakaway) breaking the Juvenile National Record in the Flying 200m in a time of 11.993 seconds, which got the Arima crowd to its feet. Baptiste’s reign didn’t last long however, as Jabari Whiteman (Southclaine) set a new National Record in the next ride to eclipse Baptiste in a time of 11.924 seconds. Whiteman would go on to take Gold, Baptiste silver and Dean Woodlsey (Petrotrin) bronze.

Joel Browne (AWCC) was also impressive in the Masters 55-59 category as the Arima representative set the fastest time among the entire Masters categories in a nippy time of 12.464 seconds. Browne would go on to defeat Wayne Samuel (Hummingbirds) in two straight rides while Cyril Fook (PSL) was dominant in the Masters 60-64 category.

Wendell Charles (Slipstream) came from one ride down versus Marlon Joseph (Hummingbirds) to capture the Masters 45-49 category while Team Foundation’s Roger Malco overcame Desmond Nedd (Madonna) in their face off for gold in the Masters 40-44 category. 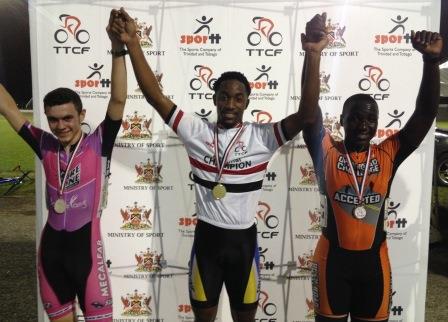 The curtain event saw a keenly contested Scratch Race for the Juvenile Men. Enrique De Comarmond (Heatwave) set the early lead within the first two laps before Whiteman made a jump for it with just 5 laps remaining. Comarmond kept a close eye on Whiteman and almost rounded him in the last 100m. The Heatwave cyclist was not able to defeat the dominant Whiteman, seeing the Southclaine cyclist take his second Gold in as many events. Darius Beckles (Open Road Challenge) snatched bronze in a sprint finish ahead of Adam Francis (Braves) and Zion Pullido (Sonics).

The 2nd day pedals off at 5:00pm at the Arima Velodrome on Saturday with the Team Pursuit (Juveniles only), Individual Pursuit, Keirin (Juveniles Only) and Scratch Race (Masters only) up for grabs. 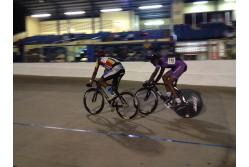