The favourites were already Whiteman, Orosco and Cole before the starter blew the first whistle to start the 10km (40 Lap) event. They solidified everyone’s thoughts within the first five (5) laps when they broke free from the bunch. They repeated that trend two more times before the race could finish, however, the bravest move came from the inconspicuous Marcus Boneo (AWCC) who timed his attack with just about 10 laps to go.

Earlier in the night, Breakaway CC won the Team Sprint in a time of 50.892 seconds. The mixed team of Southclaine CC and Phoenix CC were however disqualified for an incorrect changeover. The Junior Championships continue on Friday with the Points Race and Keirin from 7:00pm at the same venue with free entry for all patrons. 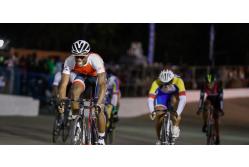