Baptiste however would amass the most number of points after the Track Series points were tabulated. Malik Broomes (Madonna Wheelers) pulled a surprise victory in the Youth Developers Under 9 Boys category, finishing equal on points with Jaquan Elbourne (Open Road) but being adjudged the winner for placing higher in the last event of the Track Series.

The main event saw Elite 1, 2, Juniors and Juveniles cover 40 laps around the Arima Velodrome in a Points Race format and once again the dominance of Sutherland was evident after taking the race. He had to work hard for it as with one sprint remaining he saw himself one point behind Orosco (Team DPS) but thanks to a strong lead out by teammate Jamol Eastmond, Sutherland would finish just ahead of Orosco with Enrique de Comarmond (Heatwave) finishing third overall.

Next weekend will be cycling packed with four days of racing at Skinner Park for the SFCC Track Meet on Thursday, Southern Games Criterium on Friday, Luces Brothers Memorial Classic on Saturday and Southern Games Track on Sunday. 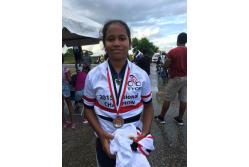