Dean Woodsley (Petrotrin) made it two out of two in the Juvenile Boys sprint events after he defeated Chaquille Henry (AWCC) in a keenly contested Sprint final this afternoon at Skinner Park. Henry who qualified fastest, broke the Age Group record with a time of 11.90 seconds won the first of 3 rides in the Sprint final. But Woodsley would come back and win the next two rides, taking the title in 3 rides.

The Tinymites sprint was also exciting but young Justin Baptiste (Breakaway) showed his sprinting prowess after defeating D’Angelo Harris. Baptiste would make it three wins when he went on to capture the Scratch Race crown later in the afternoon.

Jabari Whiteman (Southclaine) continued with his upper hand on Tyler Cole (Sonics) in the Juvenile Boys endurance events as the Presentation College, San Fernando student, Whiteman defeated the Presentation College, Chaguanas student, Cole in a sprint finish to the end of the Scratch Race. In the keenly contested curtain closer event, 15 Laps for Juvenile Boys, Whiteman, Cole and Orosco separated themselves from the bunch. Even with a quick change of wheels after suffering a flat tyre, Cole re-joined the pack but Whiteman just had the better sprint at the end. 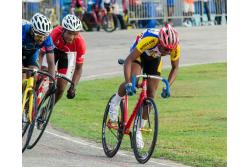