Nicholas Paul (Breakway) gave a boisterous crowd plenty to cheer for at the National Cycling Centre after he captured the Sprint title at the Elite National Track Cycling Championships on Saturday night. Earlier in the morning, Paul qualified 3rd fastest in a quick time of 10.398secs with Kwesi Browne (AWCC) second fastest in 10.363secs while Njisane Phillip took poll position with 10.300sec flying 200m effort.

Quincy Alexander (Team DPS) had an unfortunate incident when his tyre blew out while preparing for his Flying 200m effort, seeing him crashing down the steepest point of the banking. Though he got back up and re-attempted his Flying 200m, his time of 10.643secs was way off his best at the NCC. Consequent to that, Alexander scratched from the remainder of the event as well as Njisane Phillip who seemed to be suffering from a stomach bug.

In the semi-final, Paul rounded Kwesi Browne in both rides to advance to the Final against the reigning Keirin champion, Keron Bramble (Sonics). The final was similar to Paul’s semi-final where he easily rounded Bramble in two tactical rides to take the win. The young sprinter from Gasparillo punched the sky as he crossed the line then acknowledged his supporters in the stand.
Kollyn St. George (Breakaway) qualified fastest in the Flying 200m and made easy work of her teammate Dominique Lovell in the Sprint Finals.

The Elite Men and Women Omnium titles were captured by Campbell siblings, Akil and Teniel respectively. Akil rode an excellent final points race, lapping the bunch with 1 lap remaining to win on a total of 164pts while teammate, Varun Maharajh finished in second on 154pts and Adam Alexander (Team Foundation) was in 3rd on 138pts.

Teniel rode a controlled event, leaving it for the Points Race by lapping the bunch on her own to take the Omnium on 178pts while Alexi Costa (Heatwave) dug deep to take second with just one sprint remaining just ahead of Alexandra Bovell (Unattached). 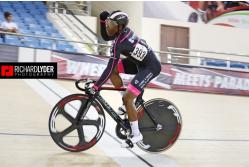