Heatwave cyclist, Jabari Whiteman made it three wins from three starts when he captured the Junior Men Points Race on Friday night and then dominated the Junior Men Omnium on Saturday. Whiteman won the four-part Omnium event by winning the Scratch, Elimination, Tempo and Points Races in convincing fashion.

Whiteman maintained control of all four events as he kept an eye on his closest competitors, Tyler Cole and Lorenzo Orosco both of Team DPS. To place the nail in the coffin, while already leading with an unassailable lead in the Omnium – Points Race, he leaped out of the bunch with two laps remaining with no one being able to close the gap that he opened. Tyler Cole would beat Orosco in the final sprint to split them into second and third.

Je’Land Sydney picked up his first Gold medal in the Championships in the Men’s Sprint, exchanging places with Chaquille Henry who was the winner of the Keirin the night before. This time however, Sydney left no stone unturned after qualifying fastest in a time of 10.930 seconds; a few hundredths of a second faster than Henry at 11.013. Sydney would defeat Aaron Alleyne (Phoenix CC) in the Semi-Finals and then Henry (AWCC) in the finals, both in straight rides.

Alleyne would come from one ride down to beat Dean Woodsley (Breakaway CC) for Bronze in the Sprint.

The fourth and final day pedals off on Sunday at 11:00am with the Standing 250m and Individual Pursuit and culminates with the 1km/500m Time Trial from 5:00pm. 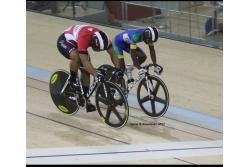